By: Jeanette Windle with Lorraine Stirneman 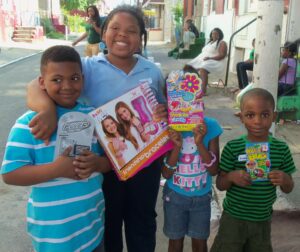 The Friday afternoon offered a perfect ending to a five-day open-air Bible club. No summer downpour had necessitated scattering to shelter. As teenage volunteers taught the final Bible story, children listened avidly, eager to win prizes in the review game that would follow. A few parents listened as well in the background.

The first loud crack could have been a clap of thunder. But as more shots followed, the volunteers realized that two young men had entered the park and were shooting at each other—over the heads of the gathered Bible club participants! Screaming, children scattered for cover. So did the volunteers. One female volunteer found her arm grabbed by a woman in Muslim garb. At first frightened, she quickly realized the woman was pulling her to safety within her own home.

Within minutes, police had arrived, and calm was restored. But too late to finish the Bible club. One big disappointment was not being able to hand out the prizes kids had earned. No matter. The next day the volunteers returned, handing out candy and other prizes house-by-house.

The volunteer team in question were members of a church youth group visiting Philadelphia as part of BCM’s annual inner-city summer outreach program. The 2014 shooting incident was certainly terrifying enough to dampen the fervor of youth group teens or their leaders. But instead of throwing in the towel, this particular youth group was back the summer of 2015, leading Bible clubs in the very same housing project.

If flying bullets are hardly typical, running a BCM summer Bible club program in inner-city Philadelphia is not without adventure—or rewards. The Bible Club Movement, now BCM International, was birthed in Philadelphia in 1936. Almost eighty years later, BCM children’s ministries have spread across five continents. But one constant has been the outreach to neighborhoods and housing projects, often among the poorest and crime-ridden, in urban Philadelphia. And like the well-known postal service creed, neither rain nor heat nor the occasional flying bullet stays BCM summer volunteers from their Bible club rounds.

Philadelphia Area Ministries, or PAM, is the umbrella organization under which BCM serves inner-city Philly. During the school year, PAM holds weekly Bible clubs in homes across Philadelphia as well as adult Bible studies and discipleship. A scholarship program also permits hundreds of Philly children and youth to attend BCM’s Camp Streamside in the Poconos each summer.

Following more than a decade as a missionary in Africa (see her biography To Africa and Back), BCM missionary Lorraine Stirneman has been working with PAM since 1980. Today she heads up a team that includes BCM missionaries Christine Wigden, Lisa Lambert, Bea Stocker, Lorraine Stirneman and regular volunteers Laura Short, Doyle Gray, and Alice Schubrick in training hundreds of youthful volunteers for summer children’s outreach.

The annual program begins with BCM missionaries scouting out neighborhoods, housing projects, parks, or just a strip of sidewalk. Lorraine Stirneman explains, “We look for places where we see the most children playing.”

Once an address has been noted, missionaries will visit the area, handing out invitations, and letting parents know which week a Bible club team will be arriving. For many neighborhoods this has become an annual tradition. Lorraine Stirneman shares that she is now seeing grandchildren of the first children she taught showing up at Bible clubs.

By June, youth mission teams begin arriving from all around the United States. The majority come through an organization called Center for Student Missions, which partners with BCM and other ministries in youth mission projects. Other churches have been bringing their youth groups to volunteer each summer for many years.

Volunteer teams are divided between four weeks of Bible clubs. Early Monday morning, each new group arrives at Calvary Fellowship Church, a Philadelphia church which hosts the program, for a training session headed up by BCM missionaries. Volunteers learn to teach the week’s Bible lessons, lead games and songs, and children to Christ. By mid-afternoon, the group is ready to head to their first day of Bible club.

Volunteers are divided into groups of three, each containing one adult as well as teens. Each group receives a map to a scouted location. Once there, volunteers initiate a game time that includes water balloons, relays, and other activities. As playing children see the games, they come running to participate.

Game time over, the volunteer team spreads out a large tarp on the grass or sidewalk. The children learn quickly that the tarp is their “classroom”. Attendance and contact information is taken, and each child receives a name tag. Bible clubs may range from half-a-dozen children to forty-plus. The volunteers lead the children in singing songs and learning a Bible verse, then teach a Bible lesson, followed by a review game that rewards the children with prizes for how well they have listened.

During the 90-minute Bible club period, Lorraine Stirneman and other BCM missionaries drive around to each of the week’s locations, checking that each Bible club is running smoothly and also providing a sense of security to the volunteers. For many teenage participants, the poverty, dismal living conditions, drug use and even violence they encounter is a shock. The BCM missionary team makes sure someone is always nearby to respond in case of emergency.

Lorraine Stirneman acknowledges that neighborhoods reached by PAM’s summer Bible club program are not always the safest. She adds, “If we as Christians say we can’t go into these areas because it’s dangerous, and yet these children have to live there, how can we claim to have faith? Praise God, we’ve never had any volunteers hurt. God has always protected us.”

Help comes sometimes from other sources. At one 2015 Bible club, volunteers noticed a group of adults, including three policemen, praying together down the street. They were Christians holding a prayer service concerning violence in the neighborhood. They in turn came over to thank the Bible club volunteers for what they were doing.

At another club, a tall African-American man who was a neighborhood block captain showed up daily. “We need this!” he told the volunteers, explaining there’d been a shooting nearby just the day before. He thanked the team for offering his neighborhood’s children an alternative to the violence, drug-dealing, and other negative influences they witnessed every day. 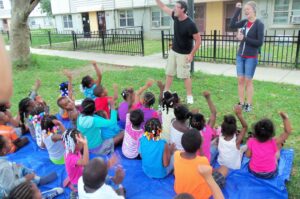 Parents too often bring a chair out to listen and offer oversight. Many remember attending Bible clubs in their own childhood, and even those who do not themselves attend any church express gratitude for the positive impact of the Bible clubs in their children’s lives.

Other challenges involve both Philly’s extreme summer heat and frequent downpours. Volunteer teams learn to pick out a nearby porch, overhang or abandoned building for shelter when it rains. On occasion, even the tarp each team carries becomes a shelter or the inside of a van. The summer of 2015 was particularly rainy. The BCM missionary team shares how on many days, the volunteers would gather to pray before heading out under gray skies, and the rain would hold off just long enough to finish the Bible club before the skies opened up. Not once did a Bible club cancel because of weather.

The Bible clubs run for five days, ending with a special closing program on Friday. But that is not the end for the children. The BCM missionary team follows up at each location, if possible, arranging a regular weekly Bible club during the school year and connecting local churches with children and families interested in follow-up.

During the summer of 2015, a total of 116 volunteers participated over the four-week program, holding Bible clubs in forty different locations. 659 children attended the Bible clubs, and 93 prayed to receive Jesus Christ as Savior.

The children who attend are not the only ones impacted by this ministry. Lorraine Stirneman shares, “I use to think our summer ministry was all about reaching children. Now I see it is just as much about the young people we are training. Many express how the experience has changed their life and that it is the first time they’ve led someone to Christ.”

A note the BCM missionary team received from a 2015 participant sums up what many others have expressed: “I went into the Bible Club worrying about how well I could teach the children. Instead, they taught me. I learned so much from them, and I will be forever grateful.”

Another writes: “Thank you for encouraging us to go way outside of our comfort zone.”

It isn’t too early to volunteer for the 2016 summer Bible club program. For information, contact Lorraine Stirneman at lcstirneman@gmail.com.