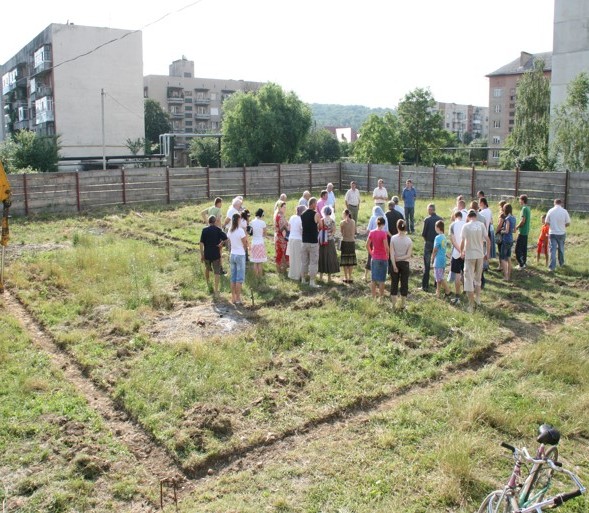 Mukachevo, a city located on the far western side of Ukraine near the borders of Slovakia, Hungary, and Romania, is the location of a new BCM church plant pastored by BCM missionary Rev. Timothy Dymchenko. The church property was purchased in 2008. Rev. Dymchenko remembers standing with Bob Evans, president-emeritus of BCM, near a tree on the empty lot and asking Bob to pray that God would provide means to build a church there. God answered prayer, and that tree has now been dubbed the “Bob Evans tree”.

Unable to hire outside help for the build, the Ukrainian church members built the church with their own hands. In 2010 when volunteers cleared the land of brush and trash, they discovered electrical lines below the surface that would prevent breaking ground. Rev. Dymchenko explains: “We were praying about this problem when a friend stopped by to ask how things were going. I said, ‘Great, but we have this problem with buried electrical cables.’ He replied, ‘I have a friend who can help.’ That friend turned out to be the director of the electric company. Within one week the cables were removed. Praise God!”

Short-term ministry teams also came to help build, even supplying some of the funding. Four years later in 2014, the church was completed. The front door now stands where the “Bob Evans tree” originally stood. What began as a small group of believers has grown to more than 80 adults along with an additional 60 children. The church has already outgrown their Sunday School wing and needs to add on additional classrooms.

Pray for this church plant to continue expansion in numbers and in space.